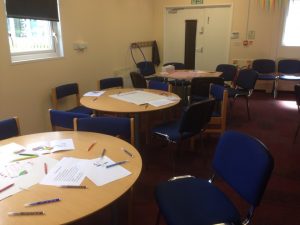 Sixty Luton school children taught us a thing or two about the spirit of enterprise when they took part in our ‘Junior Dragon’s Den’ style money workshop this June.

It all began when we were invited by Ferrars Junior School to take part in their Enterprise Week by helping them with their Money Day. Keen to get involved, we immediately said yes…. and then it dawned on us.

How on Earth were we going to deliver a piece of useful financial education to inspire sixty 7-11 year olds? We couldn’t exactly go in with the latest budgeting tools and tax emptions!

Luckily the Eureka moment happened when we came up with the idea for the Dragon’s Den style event (Suzanne and I are still arguing about whose idea it actually was). Anyway, the plan was to give the kids a chance to explore their ideas for new products and businesses, including getting the money side of things right.

So, there we were, on 12th June, arriving at the school gates with our workshop prepared but no idea how this was going to pan out. All we can say is that the children we worked with that day were amazing – mind-blowing even!

We challenged them to design a new product (anything from a new chocolate bar to a mobile phone) and then got them to think about every aspects of turning it into a business. Working in teams, we helped them to look at areas like who they would sell it to, how much would it cost, where would the materials come from, how much could they make it for and how would they tell people about it. The children then presented their ideas to the ‘Dragons’, otherwise known as their own teachers from the school.

To give you an idea of their boundless creativity, here’s what they came up with:

• The Multi-chair – with add-ons like an incorporated fridge or TV
• Super Epic Rainbow Bar – a chocolate bar that changes colour and has multiple flavours
• Terrific tablet – a duel screened tablet that enables two players to play together, one on each side
• Funky star school bag – a school bag that can be customised with added pockets and design features
• Majesta trainers – trainers which, at the press of a button, can turn into everything from football boots to flat hockey shoes
• PS3445 – a new generation console with numerous other functions such as worldwide wi-fi
• Usain Boltz – aerodynamic trainers that make you run faster
• Pear Pad – similar to the IPad but shaped like a pear!
• Snack dispenser – a dispensing machine that could double up as a mini corner shop for villages
• Milky chocolate star – a star shaped chocolate bar where each arm has a different flavour.

Not only were we impressed with the clever thinking behind all these ideas, but the children also showed great understanding of how to run a business. We watched in awe as they planned areas such as their branding and marketing and quickly got to grips with the idea of weighing up costs with sales to produce profit margins. One girl even asked if we could really help her bring her ideas to market!

So the event went brilliantly – the school’s teachers were happy, the kids really enjoyed themselves and so did we. It was a morning that left us wondering if we could roll out a programme like this to other schools. Why? Well, considering the UK now has its highest level of self-employed people, improving entrepreneurial skills and financial education among children can only be a good thing for the long term success of the UK economy.

On a more personal level, this was a day’s work which we simply got so much out of. How often do you get to witness a combination of enthusiasm, creativity, passion and determination at work? We saw it in every one of these school children and that was truly energising.